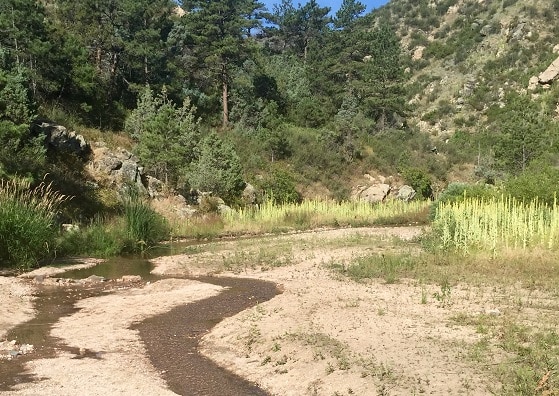 On May 23, 2012, the Hewlett Gulch Fire ignited in Larimer County northwest of Fort Collins, burning 7,685 acres. As a result, areas affected by the fire, particularly around Seaman Reservoir, experienced an increase in runoff, hillslope erosion and sediment export. The City of Greeley, owner and operator of the reservoir, partnered with local, state and federal agencies as well as private consultants to mitigate the impacts of the Hewlett Gulch Fire on the water quality and capacity of Seaman Reservoir. These mitigation efforts include mulching and seeding the burned areas of the watersheds draining to the reservoir (NRCS 2012). In spite of these efforts, large quantities of sediment have eroded from the hillslopes, channel beds, and banks.

The erosion-control project would install floodplain and in-channel structures (log/rock vanes, log structures) and revegetate with native plant materials. The total footprint for work would be about 44,000 square feet. Habitat in the project area consists of early seral species, mesic grasses and shrubs and some ponderosa pine at higher elevations and on north-facing slopes.

The biological evaluation determined the likely effects of the proposed action on federally listed species (endangered, threatened, and proposed), according to direction in the 1997 Revision of the Land and Resource Management Plan for Arapaho and Roosevelt National Forests and Pawnee National Grassland. Blue Mountain Environmental Consulting refined an official project specific threatened and endangered species list, identifying priority and non-impacted species.